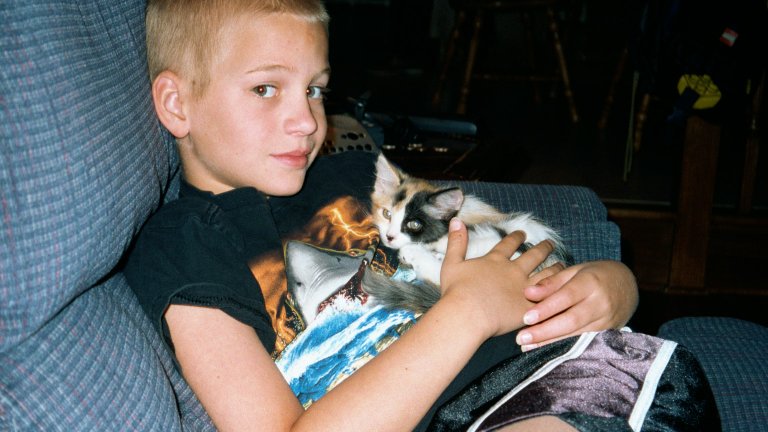 We adopted Neko from Petmart at Fox Valley in July, right before Mike's birthday. Mike got to pick-out Neko; it was his turn. We lost our beloved Orange Kitty back in March of that same year, and it was a big emotional step to adopt a new kitty. We loved Orangie so much! Our other kitty Chocolate needed a buddy and Neko turned out to be a great choice. She was such a good kitty.

Neko was born 4/30/2001, right after my birthday. We sometimes would celebrate our birthdays together.

Neko was named by the kids... it means cat in Japaneses. Later on, she picked up lots of other loving nick names. Piggie was the name we used most. We could call "Piggie, piggie!" or "Pig-pig, piggie!" and she would come running all bright-eyed to see what her people wanted. We also called her fluff-ball, fur-ball, fluff-bunny, fur-cloud, ... all affectionate names inspired by her long hair calico coat. She really was very pretty.

She got the name piggie because as a kitten she was a very big eater. Grandma one day said that she thought she saw Neko grow in size in the same day. She never really was a big people food kitty. She like her normal Science Diet crunchy food. When she got older, she like licking my microwave dinner dishes. Anything that had a chicken gravy, she liked. She would sit on the floor and meow at me to make sure I left some thing for her to lick.

She had a funny way to beg. She would walk over to her food bowl and just sit there. No meowing or other behaviors (Orange kitty used to knock things over, to get our attention to feed him). She had a sad and pathetic look on her face -- that always worked, we fed her right away.

She was a normal water drinker. We kept a bowl of water at the top of the basement steps and later on we run installed a cat-style water fountain. What was strange was that she liked ice cubes. We could go to the freeze and accidentally drop ice on the floor. She would run over and start licking the ice. Very silly.

She was big on following lazer pointers and flash lights. She could be sound asleep and when we clicked-on her favorite flash light, she would perk up and start chasing the light along the ground or up the back of the couch. In the afternoon sun in the kitchen, the sunlight would reflect off of my watch, and the reflection on the kitchen floor would drive her crazy. There was a while there when I was calling crazy... "Neko you are crazy!"

Neko had lots of outdoor friends. During the day, through the evening, she'd be looking out the window at the birds, ground squirrles, and even the leaves. In the evening, she could be sound asleep, and something outside would wake her up and she'd go running to the window "... Neko, are your friends outside?" She'd often hear raccoons or outdoor kitties.

Neko really got along well with Chocolate Kitty. Chockie would be sitting on the blue chair and Neko would jump up and join her. They would sit snuggled together, often times grooming each other.

After Chockie died, Neko was moping around... I almost sensed a loss or a sadness from her. She really like her. When we adopted Xavier in 2006, the first thing Xavier did when he got home was stand up on his hind legs and display his front claws and hissed... And, thus Neko gave Xavier the nick name of Monster. Ever since, Monster and Neko were house mates getting along, somewhat ok.

Neko made sure Monster knew who was boss. It was kind of rough sometimes; a couple of times we'd see fur missing from Monsters front; we assumed Neko took a big bite. When they weren't playing rough, they would chase each other around the house. I almost thought that Neko looked forward to being chased. Neko was doing that with Monster all the way up to her last days.

In the evenings, Neko sat next to Cathie on the couch. Neko would try to sit Cathie's lap, but she was usually reading a book or had her laptop open, so Neko would snuggle up tight to Cathie. Often, Neko would paw at Cathie; that meant that Neko wanted to be petted. Cathie was happy to oblige. Cathie was the biggest brusher of Neko coat. Neko usually liked being brushed, but when she had too much, she would nip at Cathie... silly kitty!

If Mike was home, Neko would be sitting with Mike. If he was lying on the couch, Neko would mostly be lying by his head. If he was sitting, Neko would try to sit on his lap. If Mike was on the floor, Neko would sit with him. When Mike was home Neko slept in Mike's bed. In Neko's last days, she found Mike's Halloween costumes box in the basement and she made a nest in that box... she really loved her Mikey.

Liz and Neko got along really well. Neko would sleep with Liz and would sit with Liz when she was on the blue chair. Liz had the best "piggie, piggie" call, and you could alway find Neko after Liz called her. Liz made a beautiful print of Neko that is hanging in my office at work. Liz alway drew a sketch of Neko in greeting cards. For a family outing to a do-it-yourself pottery store, Liz made a beautiful pottery pig, painted in Neko's Calico pattern. So clever, so cute. Liz has cat allergies and she tried to keep her bedroom door closed at night. In the mornings, often you'd hear loud banging on Liz's door; sure enough it would be Neko pawing at her door to get in. That probably annoyed Liz, but Liz knows that cats rule the house.

Neko was sweet. She had such a nice friendly disposition. She always wanted to be with her people. She was at the door when we came home. When we took her to the vet, she was always well behaved. When we grabbed the scruff of her neck, she went limp. It seems like the only time she'd get fussy was when she was being brushed too much... and she did need frequent brushing.

Sitting next to Cathie on the couch, she learned to watch youtube videos. Cathie found birdfeeder videos with sound. Neko would love those videos. She would bat at the screen, look behind the screen and get all upset about the birds that go in the house. It was very cute, when Neko would beg to watch a birdfeeder video.